In his Study of Internal Shapes and Outward Manifestations, created for the Italian Pavilion of the Venice Biennale 2015, Aldo Tambellini crystallises in syncretic form the transdisciplinary pathway that has characterised his unique career in the evolution of Expanded Cinema. Starting with new  research on the relationship between archive material, pictorial sign and transformation of  the devices linked with the moving image, he developed a multiscreen installation in  dialogue with the historical artistic references that influenced his production, from his study  as a sculptor, under Ivan Mestrovic at Syracuse University, up to his experience at the  Center for Advanced Visual Studies at MIT with the founder of Zero Group, Otto Piene  (1974-1986). His interest in projection devices and film mediums (film and slides) began  when he moved to New York in 1959, and grew in parallel with his work in plastic materials  (Black, 1959-1961 and The Seed, 1962-63).  Attracted above all by the energetic nature of  painting, and influenced by the monumental canvases of Franz Kline, Tambellini  transferred first onto slides and later onto cinematic  frames a meticulous expression of the  power of gesture, creating over the course of ten years a portfolio that explores the potential to  manipulate film and photography according to different working techniques applied directly onto the medium.  Film is the main object of this exchange, drawing on diverse elements that mix his classical training with the  influences of kinetic sculpture, cameraless film, hypnotic cinema and direct animation. Historically, this transition  came about in conjunction with the birth of New American Cinema and is part of the process from art films to the  immersive environments of Expanded Cinema.

The experimentation with “modified” slides began in 1963, just before his first painted films, when, from the roof  of a building in Alphabet City, New York, he projected a series of slides on the relationship between the  subtraction of the slide and the intervention on the photographic material. In the artist’s works, the formal element  of the paintings is weakened. It fuses the energy of the projected forms with the architectural component, an idea  summarised in one of his 1968 works: “To dream of structures which can transform, structures in a state of flux. […] The faster man expands into space, the more he expands the senses, the harder it becomes for him to retain  and preserve his sense of permanency. […] The future will deal with energy.[…] Concepts will become  instantaneous, not everlasting but ever changing.”1

Between 1963 and 1965 the technique by which he realised these experiments changed. Tambellini shifted to glass, normally used to “contain”, stabilise and protect the 35mm frame. Glass becomes the ideal surface on which to place abstract forms, inspired by Bruno Mari’s Direct Projections and Man Ray’s Rayographs, and made by ink, oil and  aniline-based paints onto which the artist superimposes organic materials, powder paints,  and sand, often burning the wet surface of freshly applied paint to make the liquid boil and  create the effects of expansion and successive contraction of the surface. Out of an output  in excess of a thousand pieces, developed around a dozen or so iconographical nuclei, Study of Internal Shapes and Outwar Manifestations presents the two series Internal and  Animated (1965-1969), where for the first time forms follow one other, inspired by the inside of the human body, in an abstraction that Tambellini defined as an intimate connection between organ, material, trace and movement.

Only with projection does this form-symbol become the interface between idea and moving matter, in a perceptual system that is different to the immersive structures of the nineteensixties intermedia environments, and more of a self-determining apparatus in which the artist decontextualises the perceptual interaction of sound and image, deliberately preserved by the tradition of the happening. In this way Study of Internal Shapes and Outward Manifestations, by retracing the artist’s stylistic evolution, gives us the summary, as organic as possible, of a procedure that  retains and re-launches the synaesthesia between the elements of the same history.

Full text in the catalog published by Bompiani 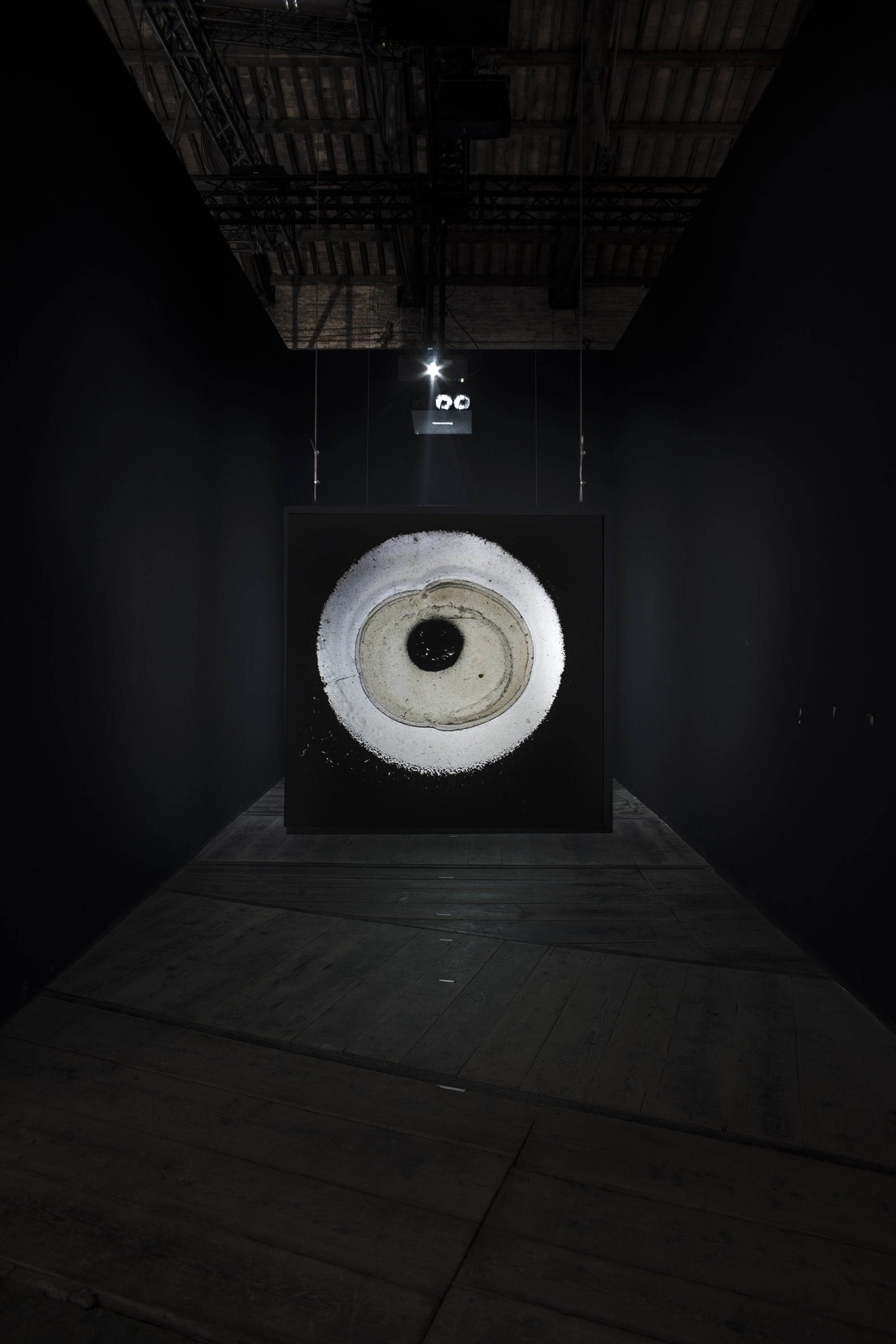 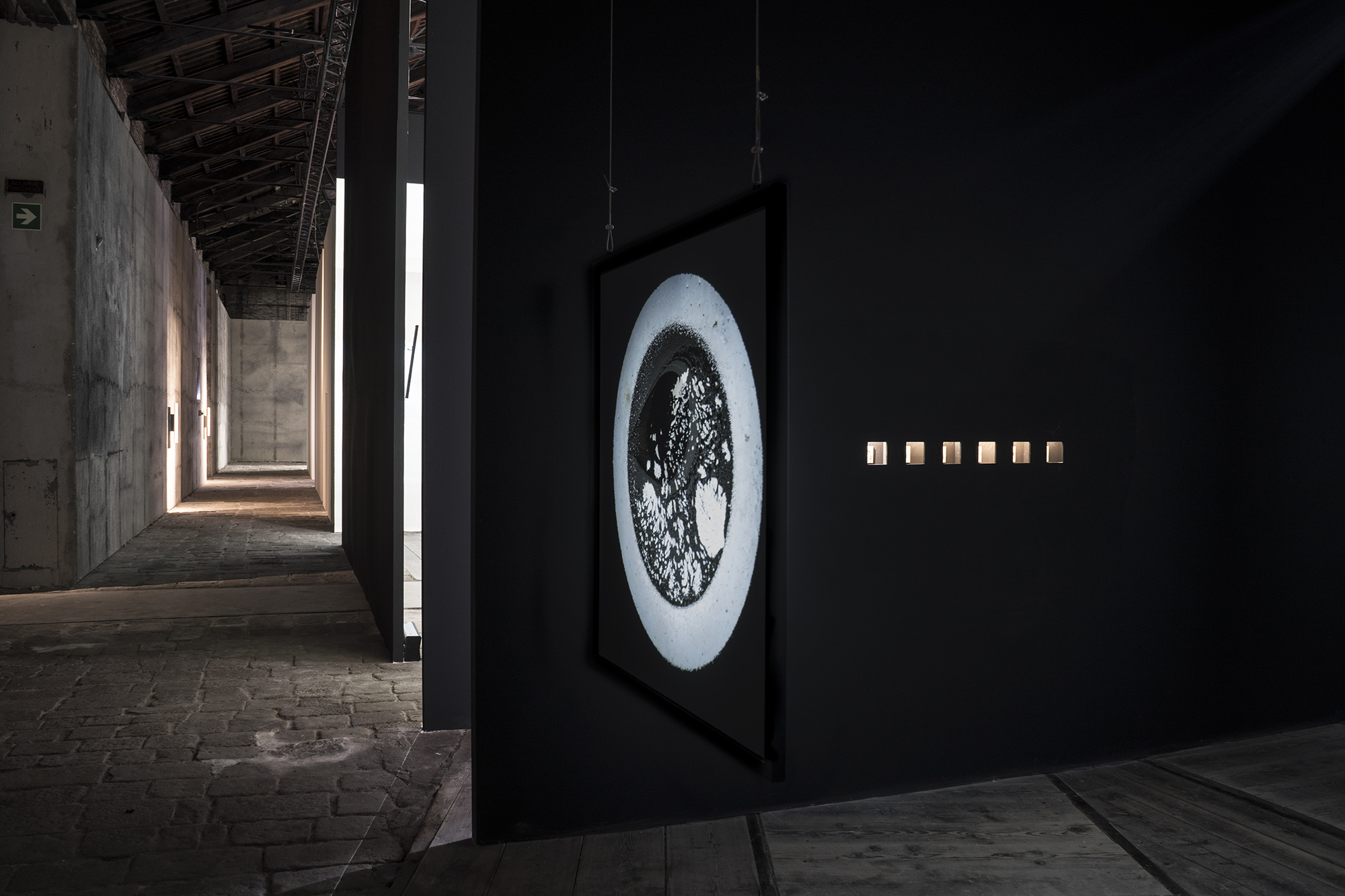 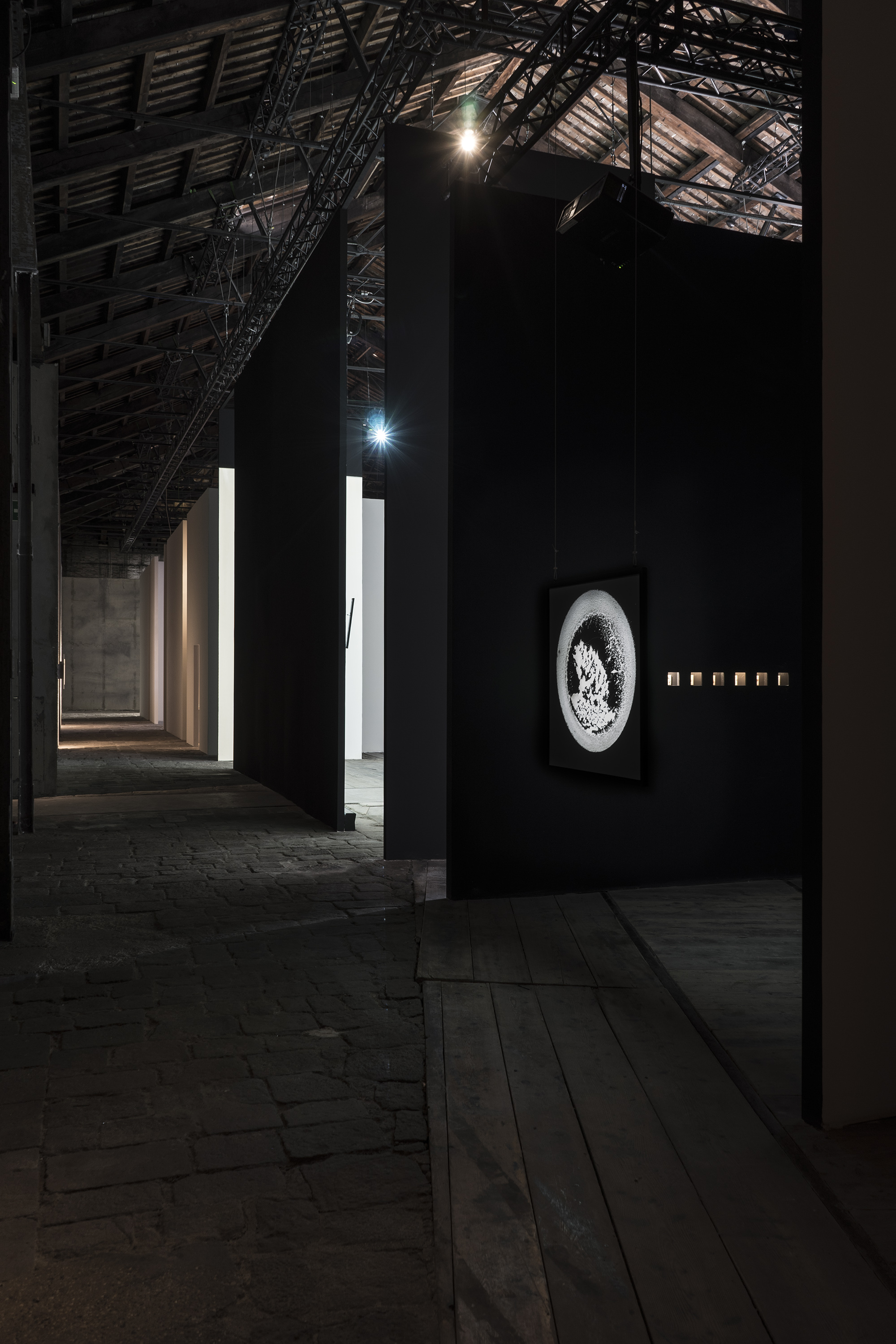 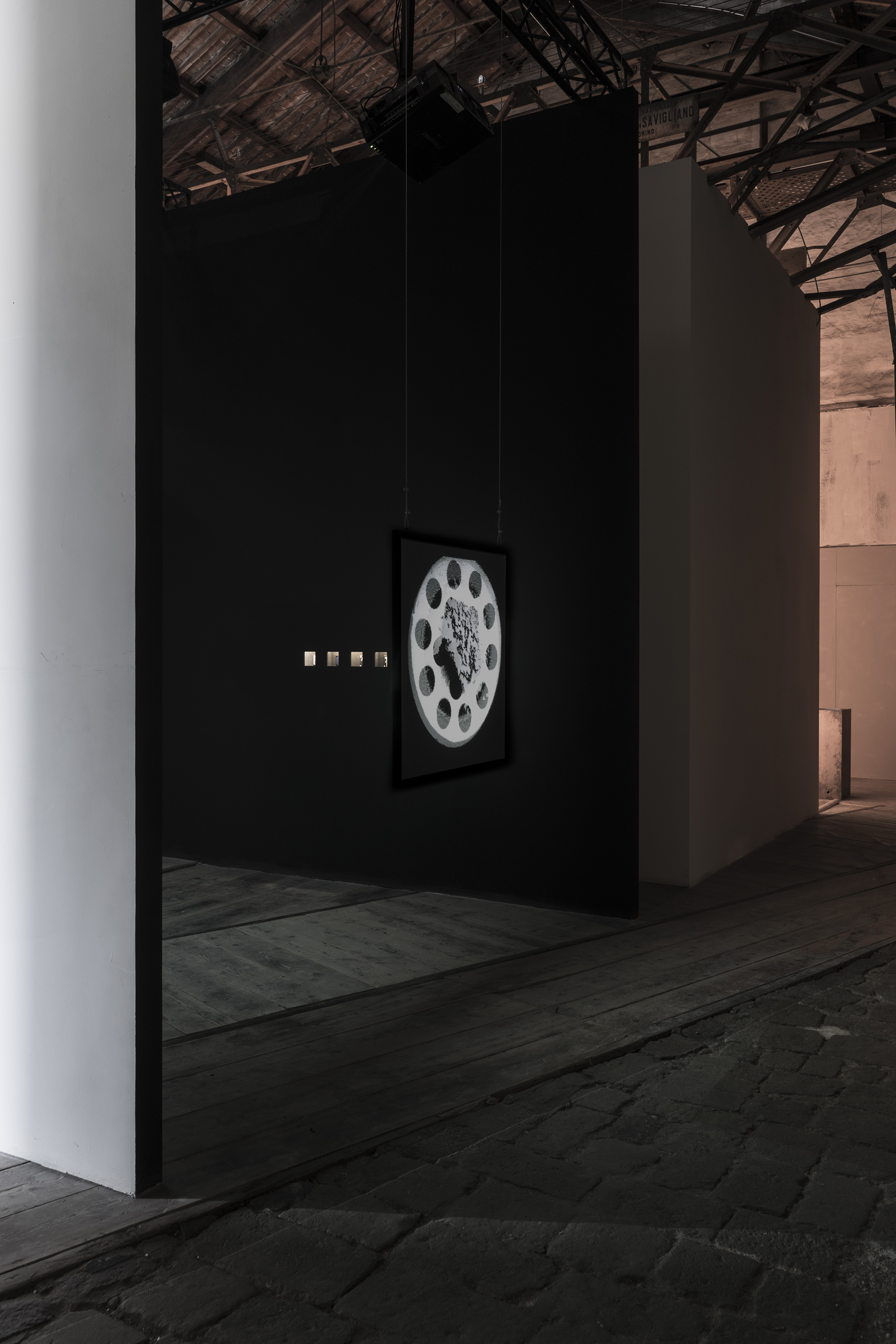 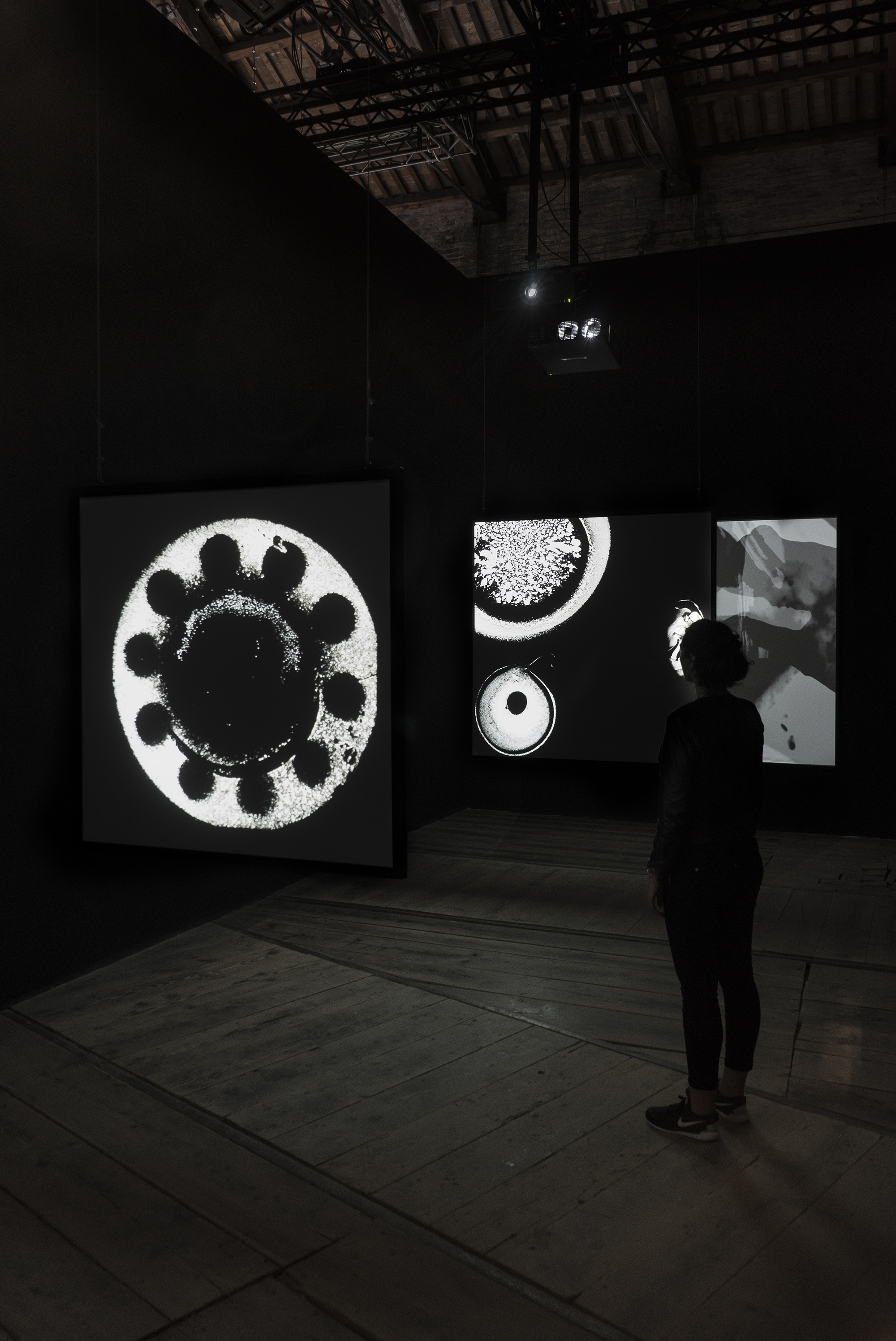 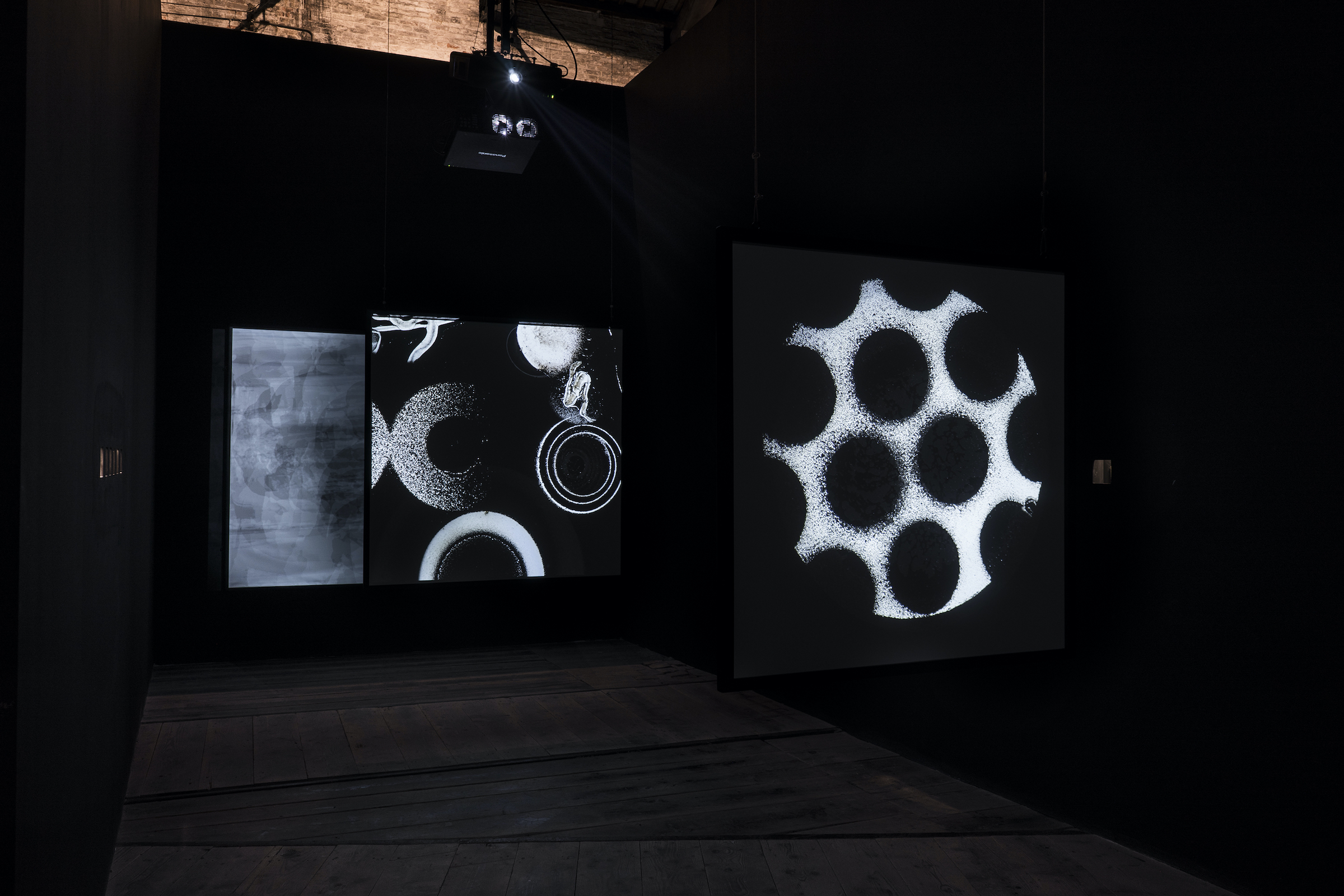 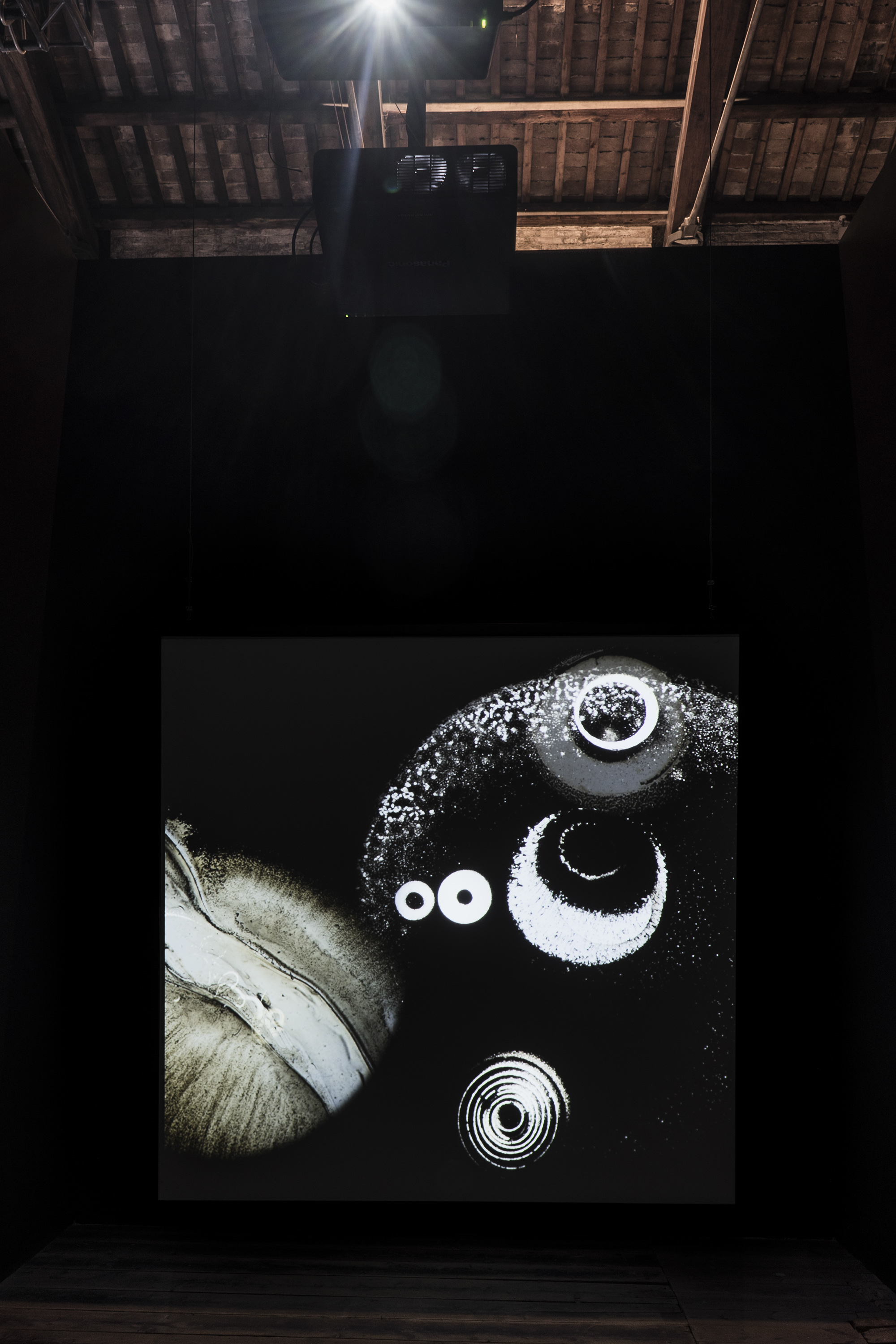 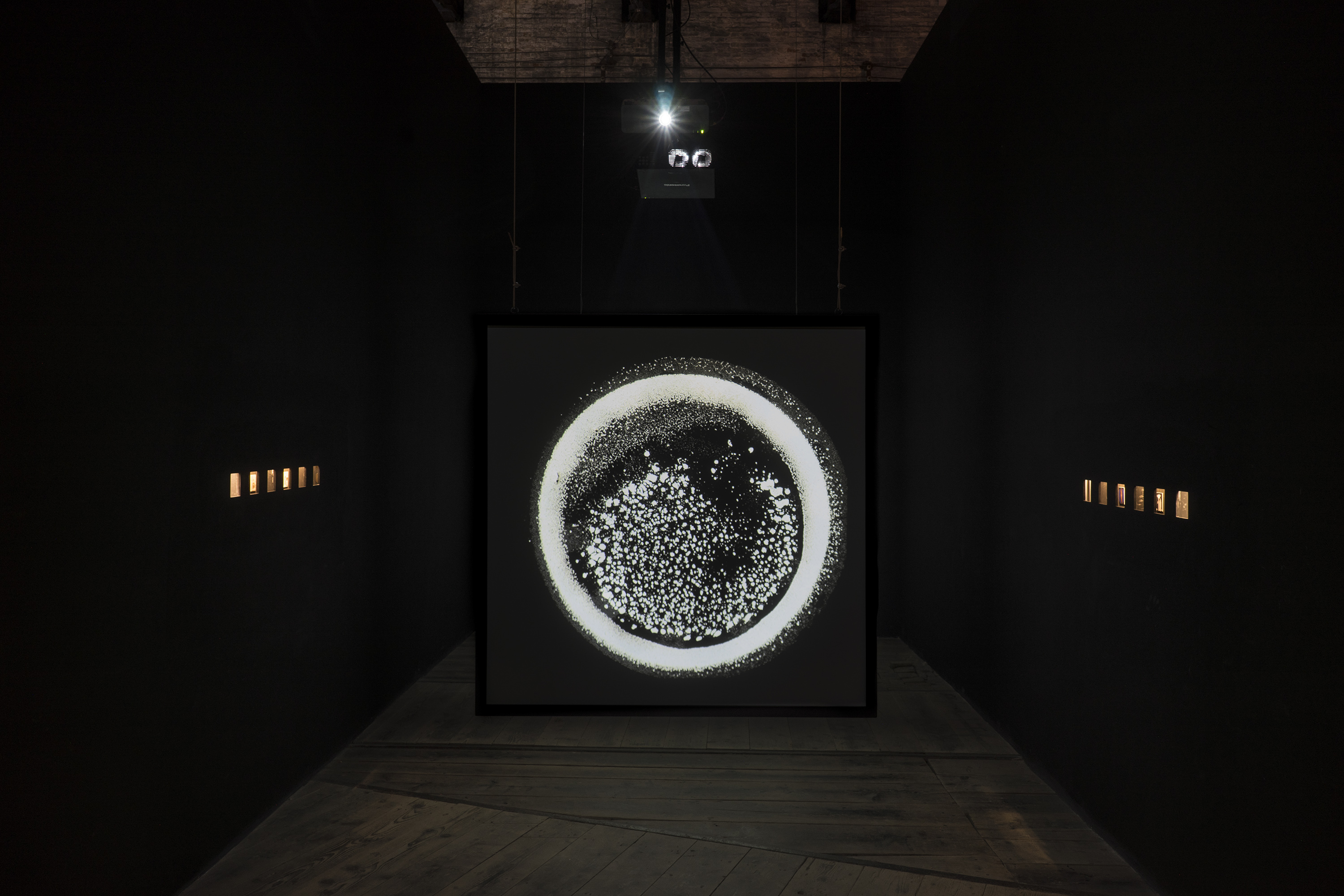 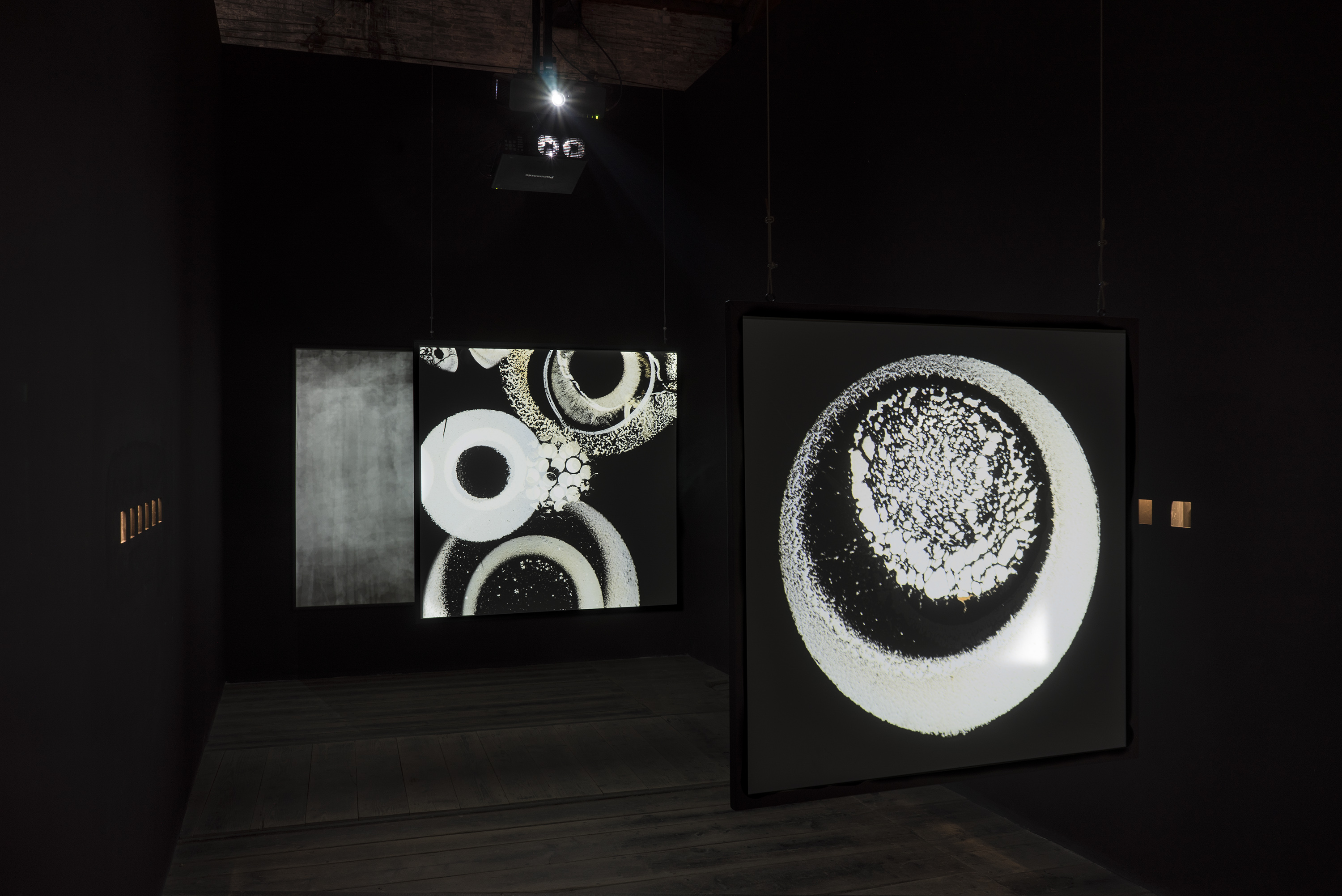 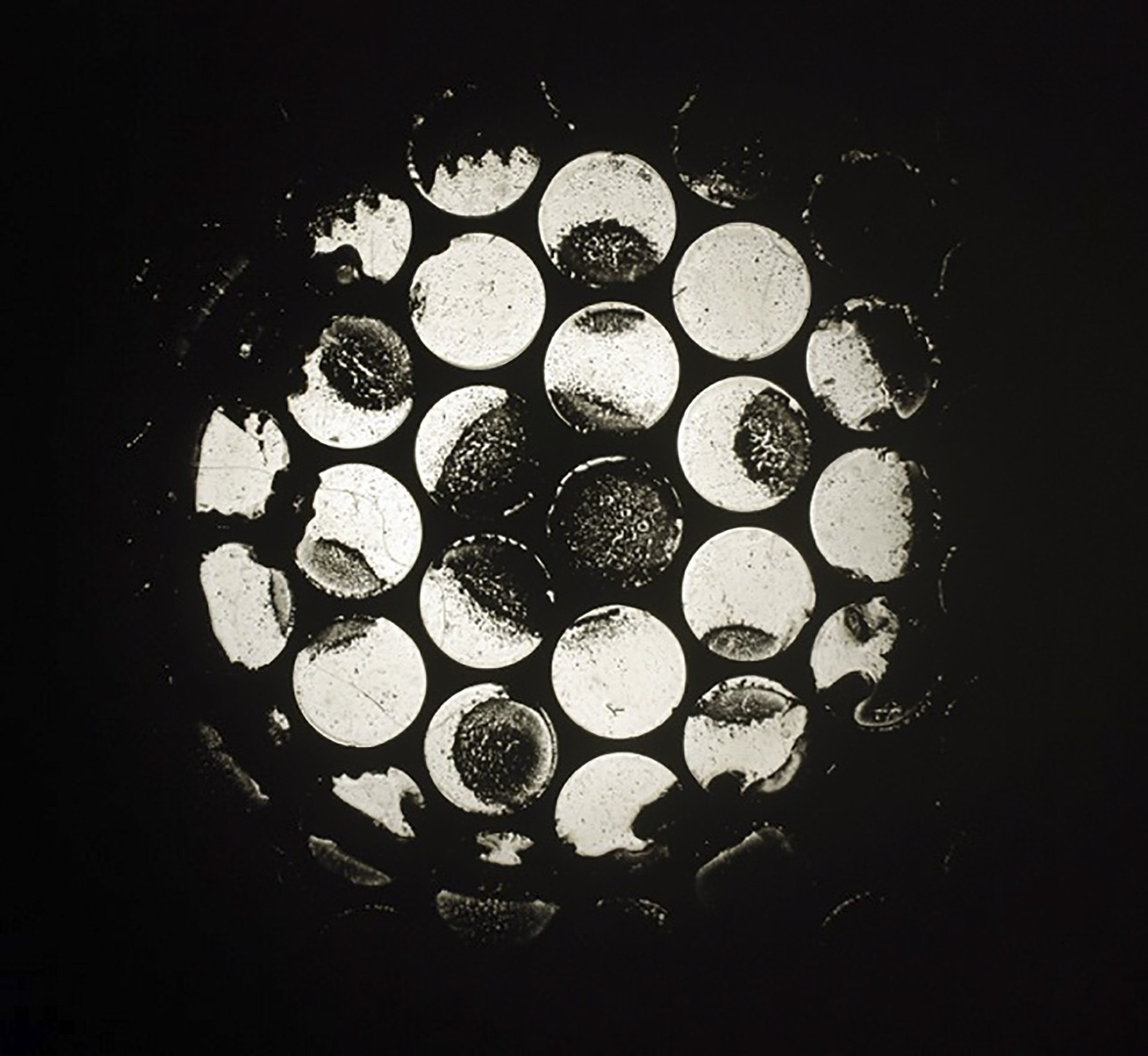